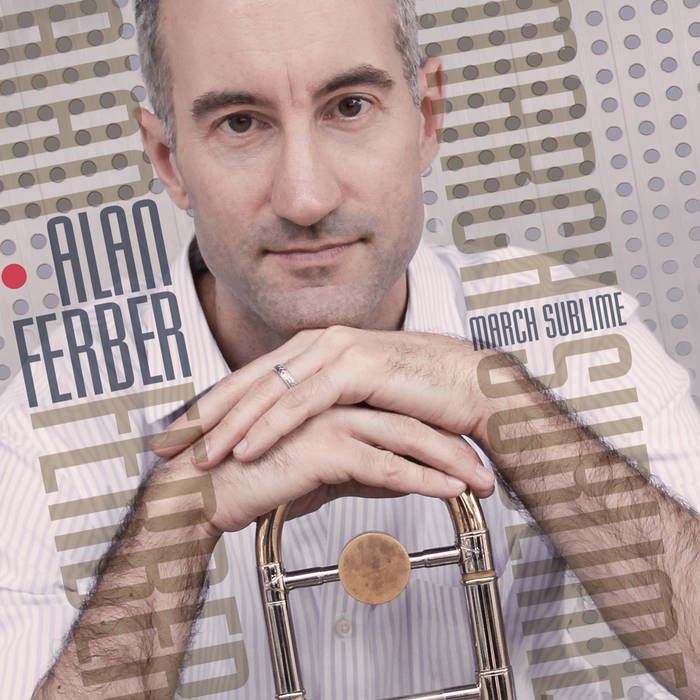 There are romantic notions tied up with jazz big bands. For a certain generation, the big band is a reminder of what popular music was during their youth, reverence for the impact and excitement the music of Glenn Miller or Tommy Dorsey brought to their young ears. Unfortunately over time, financial and logistic issues have lessened the opportunities for big bands to be heard by newer generations of jazz lovers.

Bucking this trend, trombonist/composer Alan Ferber has become one of a fresh generation of performers who have made big band writing and playing en vogue. His new recording March Sublime presents his own take on the big band tradition and advances it into the worlds of contemporary music.

Both of Ferber’s grandmothers loved big band music (one was an avid fan, and the other a vocalist with groups led by the Dorsey brothers and Gene Krupa.) Alan and his twin brother Mark continued the family tradition by performing with big bands while studying music in their teens. Later while attending UCLA, Alan was able to perform in the University big band under the leadership of legends Gerald Wilson and Garnett Brown.

After graduation, Ferber found frequent work in trombone sections of Los Angeles based big bands, including those of Louie Bellson, Les Brown and Brian Setzer. His move to New York allowed him to become a regular in large ensembles led by a variety of unique composers representing a potpourri of musical styles, most notably with John Hollenbeck, Sufjan Stevens and Esperanza Spalding.

All this is to say that Ferber has gained a lifetime of experience playing the vast canon of big band music from the originators to the most contemporary composers. His own approach is an amalgamation of these influences, from legends, innovators and peers.

The recording begins with the rhythmically intricate and uptempo “Kopi Luwak,” originally commissioned for the Atlantic Brass Quintet and masterfully arranged for big band with the 6-note motif bouncing throughout the sections. A lush arrangement of Björk’s “Hyper-Ballad” follows catching the full drama of the singer’s voice with the woodwinds. “Wildwood Intro” is a swelling, atmospheric overture to “Wildwood,” a well-paced, emotive piece referencing the place where Ferber married his wife near Moraga, California.

“So It Seems” is a moving composition written by saxophonist Chris Cheek, who is featured on baritone sax over the ever-evolving arrangement. “March Sublime” presents various textures through the trading of an ostinato figure weaving throughout the ensemble to striking effect. Ferber’s arrangement of the Hoagy Carmichael classic “I Get Along Without You Very Well” is a lovingly articulated version of this evergreen. Closing the set is “The Compass,” an original first written for nonet, which Ferber expanded for a dynamic and colorful big band arrangement.

Ferber’s attachment to the big band music of the past and his commitment to the music’s future advancement prove to be his passions. Thus, March Sublime proves to be an intriguing collection of compositions and arrangements by this extremely talented musician.

Bandcamp Daily  your guide to the world of Bandcamp

Featuring Oakland sounds from the Smart Bomb collective and Samplelov.